HALO METAL BAND is a band that arises from the merger of a few musicians with a long career path of Alicante's metal scene. The band was formed in 2013 by Willy (bass) and Peter (guitar), who decided to start off a project brimming with passion, a metal band within the lines and style of Sepultura, Pantera, Machine Head and many others.

Months later, and carefully chosing members with long experience, Storm O.L. (vocals) joins in, and since that very same moment, the band starts to work on their first setlist.

In 2015, their first EP “Golpes” finally sees daylight. This EP contains just 5 songs, and a lenght of barely 15 minutes, but it's more than enough for the band to start off, making them able to start being known. The band then goes on a Spanish tour during 2016 and 2017, during which they earn their first fans.

In November 2017, HALO METAL BAND produces, hand in hand with Rock CD Records, their first full-lenght studio album, called “Semilla Animal”, composed by 11 tracks, with a duration of 45 minutes. The band then starts to be known at a national level, earning enough followers in many Spanish cities. In 2019, Miky Drums (Orphans of Piety) joins as the new drummer. HALO has shared stage with bands such as HAMLET, VITA IMANA, BRUTAL THIN, SUIDAKRA or DAGOBA among many others within more than 60 concerts.

At the moment, the quartet is at the gates of releasing their third full-lenght studio album, recorded at Singularity Studios (Alicante). 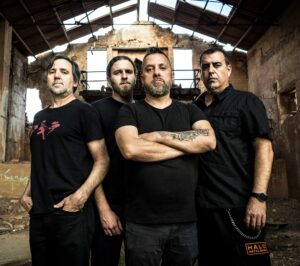